skip to main | skip to sidebar

Not Quite A Yard Sale

This morning we went to the local Lion's Club Craft Sale. They were selling books for a buck each and there was a big room filled with local craftspeople. Here's what I came back with... 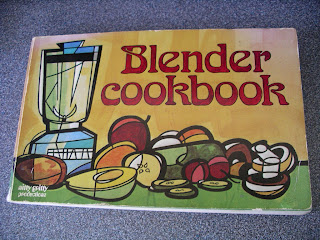 I loved the cover art of the Blender Cookbook. It reminded me of my childhood. When I returned, we played the game "Guess when it was published?" My husband said late sixties or early seventies. I said 1978, and my son said the eighties. What do you think? Read on... 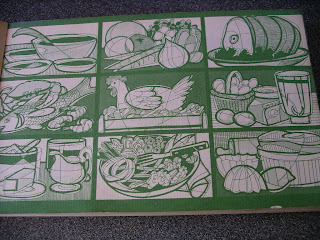 This book is fairly classy and has numerous French recipes in it. I grew up in the pre-food processor days and we had a workhorse blender with a wide blade that my mother used for everything. In the early eighties (I think), the mother of my best friend Jodie got a Cuisineart, which was a new contraption for the time. 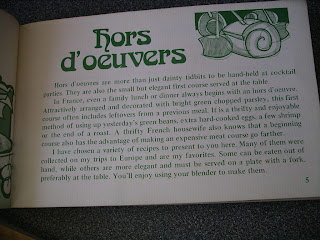 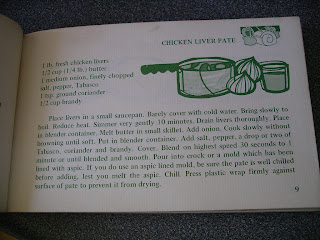 I've always wanted to make my own pate. Maybe this summer, I'll give it a try. 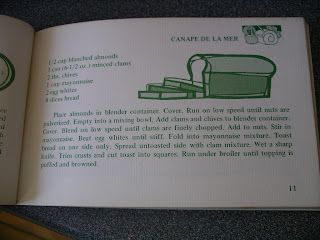 I bought a few other books on the way out and the gentleman from the Lion's Club who took my money told me that his wife donated the Blender Cookbook, which made me feel all warm and fuzzy. So the answer to the publishing question is - 1970! 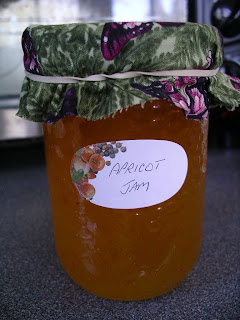 We ran out of store-bought apricot jam this morning, so I couldn't resist the homemade variety. 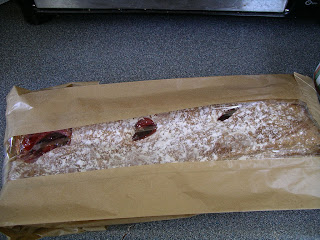 We bought two strudels for $12. They are really big and the seller told me that they made them throughout the night, so I think it was a fair deal. 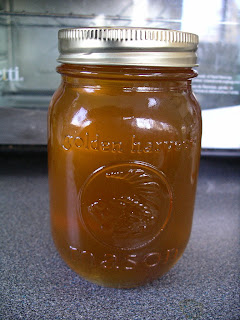 This honey came from the jam people. 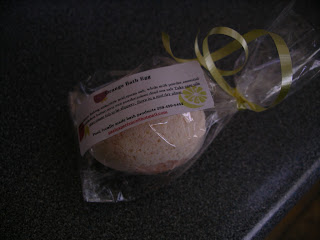 I bought my son an orange fizzing bath soap shaped like an egg. 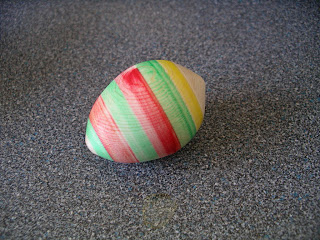 For a donation to the Lion's Club, a talented man made this wooden Easter egg for my son. We had fun watching it spin on the lathe. It brought back memories of Grade 7 Industrial Arts.
Happy Easter everyone.
Posted by Toronto Yardsaler at 10:15 AM 1 comment:

A Work in (a lot of) Progress

Thank you for the kind comments from my last post. I've been getting a lot of spam comments lately, so I'm trying to get rid of those while not deleting those from the "thrifterhood."
Here are some pictures of our new (circa 1910) home. The pictures don't do the house justice and we're still in the just moved in stage - so I apologize in advance for the photos. Having gone from a small Toronto semi (with an unfinished basement), to a humongous two and a half story detached house on a large, treed lot in a funky small town in the greater Hamilton area, we're in the funny position of actually needing more furniture. We moved our old living room sofa down to the TV rec room in the basement, and now we're on a mission to save up for a new sofa and two Barcelona chairs for the large living room. 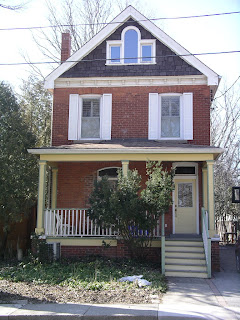 Voila! We're going to take out the yew and build a rock garden with a different low-growing tree. 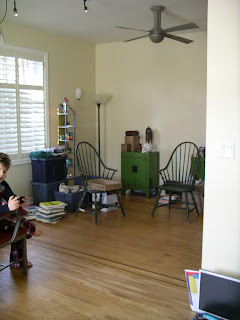 Here is half of the living room. There is an odd mish-mash of pot lights, track lighting, wall sconces, and ceiling fans in the house. We're going to remove 90% of the existing fixtures and put in new pendant lights. The area that the camera faces was once the original kitchen. 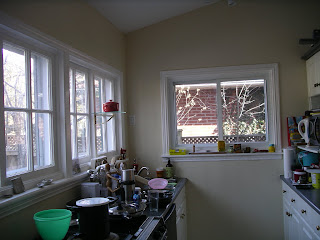 The newer kitchen is an addition. The good thing is that it is surrounded by windows (including a sky light). The bad news is that we have to renovate it. The old cabinets are old and rickety and we've actually had to bring in cheap Ikea shelves to temporarily hold Pyrex and other bits and pieces. Please excuse the mess! 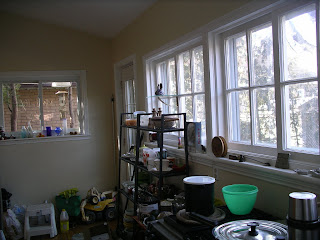 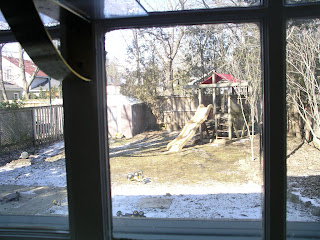 Feast your eyes on our mucho grande backyard, complete with play fort, tree swing, and a tool shed. 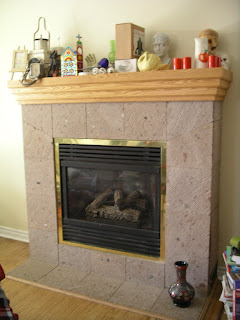 Here's the gas fireplace with a whole bunch of stuff temporarily stacked on top. I'd love to have Arts and Crafts style tiles covering this one day. 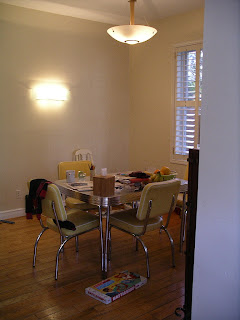 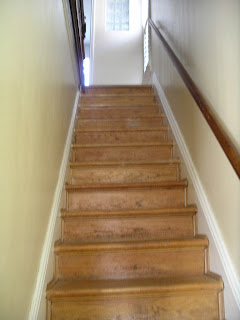 Staircase with the 100 + year sag that gives it a tipsy angle. 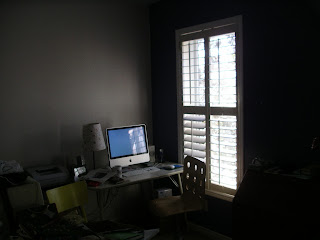 This is half of a bedroom on the second floor that will be used for an office and a model train room for my husband and son. 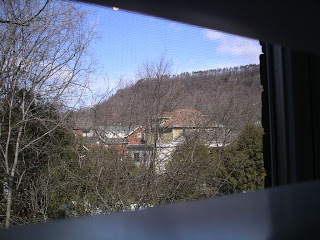 View of the escarpment from the upstairs landing. I pinch myself every time I look out and see this view. 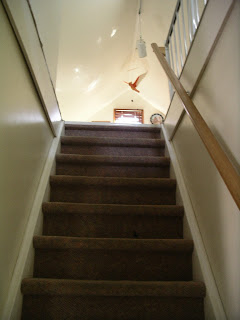 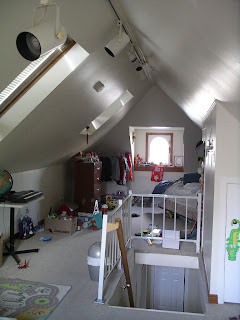 His room runs the length of the house and has two skylights. What I would have given to have a room of my own this size when I was a kid (not that I'm complaining, Mom). 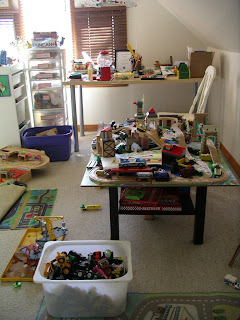 The end table is now set up for painting, etc. It's so nice not tripping over toys in the living room anymore. 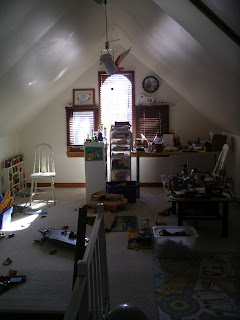 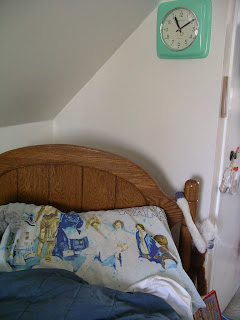 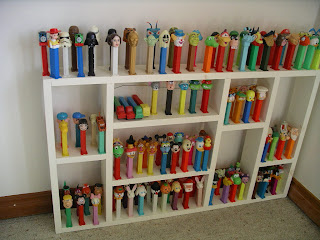 I originally started collecting Pez dispensers back in my early 20s. I gave my modest collection to my nephew, who bought more. He outgrew this hobby and passed it along to Duncan. It's a vicious cycle. 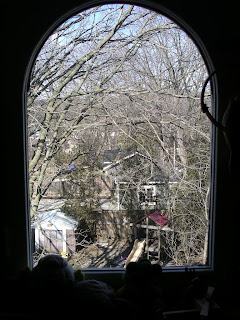 The enchanted backyard forest view from the back of Duncan's room. 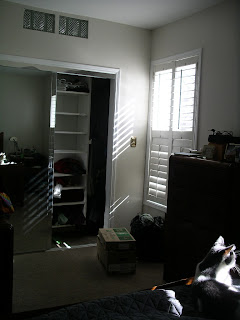 The pictures I took of our bedroom didn't turn out so well. Our room and the second bedroom on the second floor both have mirrored closets. We're going to get rid of them as soon as possible. There are oodles of closets in this house, which is fantastic. We also have two large bathrooms, which we didn't have at the old house.

So there you have it. Many people think I'm nuts for the hour and 40 minute commute to Toronto each day, but it's well worth it. As Michael Douglas' character said in The Wonderboys: "It's the kind of house you want to wake up in on Christmas day." I'm grateful to be here.

I'll try to get some better pics up once we're more set up. I also can't wait to do some serious thrifting and hitting local yard sales.

Thanks for reading!
Posted by Toronto Yardsaler at 7:37 PM 8 comments:

Back From the Real Estate Brink

(Above: Here's a photo I found of the Niagara Escarpment. This is what I see out my window from down below every day. Magic!)

Hello there,
If you are still reading - I thank you so much. If you are not... well, I guess other people are reading this.

It's been sooooo long since I last posted, but I have a very good excuse. After a whirlwind period of getting our old house fixed up and sold, we have just moved into our new house in a small town in the greater Hamilton area.

We've been busy unpacking and now we're putting things away. I've also been working and just came out of report card writing and parent interviews, so I'm well and truly ready for this March Break. I was going to take some pictures today - my first non-weekend day off, but as luck would have it, it's raining.

I'll be back very soon with pictures and more blogging.

Spring is almost here!
All the best,
Erin

Toronto Yardsaler
I'm a slightly off-beat Toronto-area teacher who enjoys writing and photography. I come from a family of collectors and now I'm dragging my own family around to yard sales. It's just a bit of fun. Enjoy the scenes.

Hey cats! My husband and I stock a booth rammed to the rafters with vintage treasures at Valley Antiques in charming Dundas, Ontario. It's a few kilometers west of Hamilton. Come visit this best kept secret in Southern Ontario and swing by Valley Antiques. There are over 50 vendors selling cool and beautiful things and you won't be paying Toronto prices (speaking as a former Hogtown gal). Click here to see some of our current inventory. Visit Valley Antiques funny Facebook page

Pyrextasy - You'll Never Get Out!

Ad Free Blog - You're Soaking in it.